Fading Yourself Out of the Picture…

From the first time we meet a family or begin working with a child, we need to be thinking about how we can fade ourselves out of the picture. This 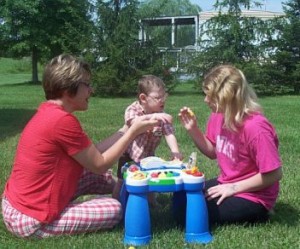 seems like an oxymoron because we’re there for a reason – to help. There’s such a fine line between helping and creating dependence, and I know that I have often not even realized that I created dependence when I though I was helping. Take this example:

I Helped Too Much

I’d worked with this family as their service coordinator and educator most of their child’s life and the day came for our last visit. We had discussed transition many times but they had not been interested in any services following early intervention, no preschool or private therapy. On the last visit, the mother became anxious and asked how to get her child into physical therapy. I explained that there was typically a wait list with the therapy agency so the best thing to do was call and get on the list. I found the therapy office number in my planner for her. She went and got the phone and she handed it to me. I looked at her and handed the phone back and started to read the number. She interrupted me and said “aren’t you going to set it up for me?” That was one of those moments when I thought, “I did not do my job and prepare her for how to do this on her own.” I’d been so eager to help over the previous two years that I had created a dependence that I’m not sure either of us really realized was there. The story ends with me encouraging and coaching her through the phonecall and her next steps, which included getting a prescription from her doctor. I walked away from that apartment thinking about how I could have done things differently. The truth is that I don’t know for sure if the outcome would have been different in terms of transition planning had I helped less directly and coached more, but I think what I did do was make myself too much of a requirement in the family’s life.

I think we easily have two choices in early intervention: to develop dependence or independence. Walking that fine line is often quite challenging because it’s different for each family. I learned that, as a service coordinator and an educator, I needed to keep the end goal in sight at all times: independence. The family’s independence was best supported when I was there to provide as much support as was needed to help them make decisions, find resources, and encourage their child’s development. This perspective also worked with teaching children too.

What a Little Toddler Attitude Taught Me

I can also remember one child I loved working with because he always surprised me. He had multiple disabilities, including ataxic movements that made controlling his arms really challenging. It was so easy for his grandmother and for me to just take his hand and help him do whatever we wanted him to do. He was incredibly smart and knew what he wanted to do and it was hard for us to see him struggle. Once his toddler attitude set in (which was a wonderful thing) we quickly learned that he didn’t always want this help. Together, his grandmother and I figured out that when he had support at his elbows to keep his arms stable, he could more independently aim his hands to do what he wanted. We learned that he could communicate what he knew using his eyes, looking at where the puzzle piece went in the puzzle or at the choices we offered. When we assumed that he needed us to help him by using pretty physically invasive assistance, we weren’t actually able to see his potential.

Two Strategies for Fading Yourself Out & Keeping Your Perspective

These families taught me to always look for ways to fade out my assistance. This was easier in some situations than others, but keeping this perspective in mind helped me release my role. It also helped families feel ownership of the amazing things they could teach their children. Here are two things I learned:

1. Before assuming you need to jump in and help, ask first. This is a great coaching technique. Ask the family questions about what they have already done to address the issue, what they would like to do, and what help they need. Let them define what to do and if they even think they need your help. Just because you think you know the answers doesn’t mean that you need to be the one to “fix” a problem. Remember that you won’t be there to fix the problem forever.

2. Similarly, observe the child first before jumping in. Always set up the situation for the child to be successful with as little assistance as possible. If a child needs full assistance with rolling over, for example, help the parent move the child just enough for the child to be able to help move himself. Encourage the parent to give just a little less assistance next time so the child feels what it’s like to do it himself. If a child needs physical assistance with feeding himself, start there, then fade back to only providing support under his wrists, then at his forearms, elbows, etc. Back yourself out of the activity and celebrate the child’s independence.

We are helpers in early intervention. There’s nothing wrong with that. Just remember that, in many cases, the best way to help someone is to help them help themselves. I know that sounds like a lot of helping, but it only starts with you. It ends with the parent’s and child’s independence.

Have you ever been in a situation where you helped too much? What tips do you have for fading yourself out and keeping your perspective?

6 comments on “Fading Yourself Out of the Picture…”