What If You Didn’t PLAY with Toys on Your Next Visit?

Dustin has been collaborating with Mandy’s family for about 3 months. He typically visits with Mandy’s grandmother every Tuesday at 10am and 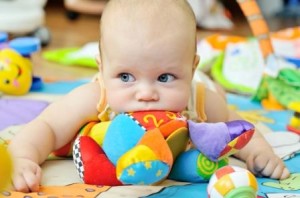 they play in the living room. Dustin has been doing well with transitioning from bringing toys to the home to using Mandy’s toys. He’s also worked very hard to include Mandy’s grandmother in the play. His next goal is learning how to use coaching during their visits, but he’s struggling with coaching during play, because Mandy’s grandmother isn’t able to get down on the floor. He’s not sure what to do next.

Why Do We Think EI=Play?

I think the answer to this question is, on one hand, an issue of tradition. We’ve always played in early intervention, that’s just what we “do,” so we continue to do the same thing. On the other hand, we also know that young children love to play and it represents a context for much of their learning. Play is fun, for the child and for us. Play-based interactions are how many of us were taught to teach children too. There’s nothing wrong with play. Perhaps, though, it shouldn’t be the only, or even the main way we interact during visits.

Play – When Does It Really Happen?

Did you know that play typically happens within two contexts for infants and toddlers? The first is independent play, with the child playing alone but near the parent. The second context is play that occurs during caregiving routines. What’s missing here? Play on the floor, or play with toys. Many parents play with their children with toys, but for many families, it’s not among the most frequent ways that they interact with their children. If we think beyond play with toys, we can recognize the value of helping caregivers learn to be playful during daily routines, and within these playful interactions  is where and how the child learns.

Maybe you’re feeling like Dustin, trying to adopt coaching and more routines-based practices but you’re struggling. One great suggestion that I heard from Dathan Rush (co-author of The Early Childhood Coaching Handbook) is to make it a goal to have intervention sessions that DON’T involve playing with toys. You might think, “well, what would I do?” Here are a few suggestions for you and Dustin:

Prepare the family – Dustin could talk with Mandy’s grandmother about how he’d like to try a new practice he’s learning about. He could explain coaching to her, describing what it looks like in practice. They could then plan for what to address on the next visit. Dustin should probably be specific, that he’d like to try helping her with other parts of her day, other than playing – so that she knows what to expect.

Revisit routines learned about during the IFSP meeting or other visits – Dustin and Mandy’s grandmother could talk about what parts of her day go well with Mandy and what parts are challenging. Together they could identify a routine to target on the next visit and discuss a plan for how to tackle it. This might mean that the visit schedule changes so that Dustin visits during the routine.

Don’t sit down on the living room floor – On the next visit, Dustin could start by breaking the “sit down” habit and reminding Mandy’s grandmother about their plan. They would then move right into the routine that they planned to focus on.

Explain coaching again and debrief afterwards – When an opportunity for coaching arises, Dustin could re-explain it by asking for permission to coach during that activity. They can then proceed into the routine, share ideas and problem solve, coach and model intervention strategies as needed, and then debrief about the coaching session afterwards. This prepares the grandmother for creating the joint plan for how she’ll use the strategies during the week.

By shifting the focus from providing intervention to Mandy during play to supporting Mandy’s grandmother in intervening with Mandy during their typical activities, Dustin can broaden the impact he can have on Mandy’s development. They might still play in the future, and will certainly be playful with each other, but opening up the intervention context beyond play can open up natural learning opportunities Dustin might not have known existed – and wouldn’t have, had he continued to play on the living room floor.

What are your thoughts about NOT playing during your visit? Have you tried it? Let us know how it works for you if you try to move beyond playing with toys on your next visit!

6 comments on “What If You Didn’t PLAY with Toys on Your Next Visit?”