Posted on April 22, 2014 by Dana Childress, PhD in All, Intervention Visits, Practical Strategies

What do you say when a parent asks if she should bite her child back? That’s an easy one for many early interventionists – no, definitely don’t bite the baby back. Knowing what to DO about toddler biting, however, can be more tricky. Let me tell you a story about my son’s first bite… 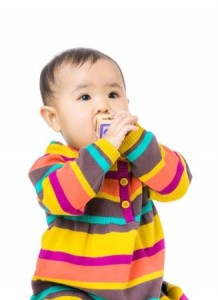 When my son was a toddler, I remember picking him up and before I knew it, he had chomped down on my left shoulder with his sharp little baby teeth. Without thinking, I yelped a great big “ouch!” I pulled him off of me and I’m pretty certain that I had an incredulous look on my face. I was shocked – that he bit me and by how much it hurt. He hadn’t been upset at all, or at least I had missed any cue that the bite was coming. Despite all that I knew about toddler development, I had no idea what to do in that instant. After my reflex reaction, I tried to recover with a firm, calm “no biting” but it was way too late. He’d already seen the effect he had and it was pretty awesome. I learned that knowing what to do and doing it in that instant were something completely different. He learned that mama makes a pretty cool noise when he bites. Not good!

I did some thinking about why he bit me and what to do the next time, because I was pretty sure it would happen again – and I was right. Thinking about the ABCs of the biting behavior: what causes a bite and why it happens (antecedent), what the biting behavior represents for the child (behavior), and the consequence of the bite are all important. Let’s look at each of these, because changing something about any of them can make the difference between having a toddler who continues to bite and one who learns not to.

The ABCs of Biting

Antecedent – A parent can often figure out why a child bit by looking at what was happening just BEFORE the bite occurred. Did another child take his toy? Was he chewing on a teether and your hand got in the way? Was he trying to communicate but he doesn’t have the words? Does he always bite the same person or at the same time of day? Sometimes the reasons for biting are obvious. In my son’s case, it wasn’t, so I needed to look at the behavior itself.

Strategies: Help parents learn to watch for signs that a bite is coming, like the child opens his mouth and is leaning in, drooling, or already biting other things.

Behavior – First, it’s important to remember that the toddler doesn’t know that it’s not okay to bite. He’s not being mean or intentionally trying to hurt. Afterall, he’s spent months biting his toys, his own hands, his bottle, etc. Biting is one of the ways he learns. He also loves experimenting with cause and effect. There are many other reasons for biting such as being frustrated, tired, needing attention, needing oral stimulation or teething. Every behavior has a purpose; when a parent can determine that purpose, it’s much easier to substitute in a more appropriate, less painful behavior. It’s also easier to understand what’s happening and avoid taking it personally – which can happen because no parent wants to be hurt by her child.

Strategies: Do your best to understand the reason for the bite, then help the family make changes based on it.

Consequence – Often, like in my case, a child who bites gets a big reaction. It may be a negative one, but it’s often impressive. Even when a child is scolded for biting, he’s still getting attention. Maybe he bites and his mother assumes he’s hungry so gives him a cracker, which he interprets as a reward. Maybe he bites and it makes his gums feel better. Maybe it’s just a release of frustration. Whatever happens after the bite must be purposeful, which isn’t always easy as I learned, because otherwise, the toddler can learn something that wasn’t what the parent intended.

Strategies: Whatever the reason for biting, encourage parents to make sure their reaction is calm, firm, and unemotional.

Share this survival tip with parents: most children don’t go to kindergarten still biting others. Mine didn’t, thank goodness.

What other strategies do you suggest for dealing with toddler biting?

Why Do Toddlers Bite: Finding the Right Response (Zero to Three)

Understanding and Responding to Children Who Bite (NAEYC)