On March 3, 2015, I was honored to present a Talk on Tuesday (ToT) webinar entitled, It’s Almost Never Apraxia: Understanding Appropriate 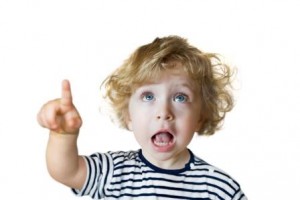 Diagnoses of Speech in Early Intervention, that addressed appropriate diagnoses of speech sound disorders in infants and toddlers.  The participants had some great questions and we wanted to ensure that the conversation continues…so here I am!  My March ToT was just Part 1 of 2. The second half will be presented on May 5th and will focus on outcomes and intervention in regard to speech sound development!  But in the meantime, it seems as though a big misconception from my March Talk is that I am advocating for fewer services for infants and toddlers…this is not the message that I intended to convey and I am hoping to begin this blog series by clearing that up!

First, let’s begin with a quick review of the facts:

When Should We Become Concerned about the Development of Articulation?

Typically, a speech-language pathologist (SLP) will diagnose an articulation disorder if a child is demonstrating a delay of at least 6-12 months in regard to the production of certain sounds, based on the age at which mastery of the sounds is expected.  To put this in perspective, because the /k/ and /g/ sounds are expected to be mastered by the age of 4 years, a child should not be differentially diagnosed with an articulation disorder characterized by errors of these sounds…until the child is at least 4 and a half years old.

A child’s speech development is not just about his or her articulation skills.  When SLPs are assessing a child’s speech, we are also looking at the sound patterns—the phonological processes–that a child is, or is not, producing.  As you can imagine—and as most of you have experienced!—in addition to developmental articulation errors, these processes often wreak havoc on our ability to understand what children are saying.  And yet…should we be concerned when working with children under the age of 3 years old?  Well…not really.  A phonological delay or disorder refers to when a child continues to simplify his or her speech by using these phonological processes well beyond the typical age expected.

Unless we consistently observe a toddler demonstrating the following red flags:

…we should not diagnose an articulation or phonological disorder prior to the age of 3 years. Again, since most of the processes that we monitor are expected to be present in a child’s verbalizations until the age of 3 or older, we really just want to monitor the patterns in a child’s words and phrases until they are 3 years old.

And What about the Role of Intelligibility?

Well, again, since we now know that children are going to be difficult to understand prior to the age of 4 years, an SLP will determine just HOW unintelligible a child is at a given point in time.  If a child is less than 25% intelligible by 2 years of age or less than 50% intelligible by 3 years old, we should be concerned.  It is then the role of the SLP to determine what the roadblock to the child’s intelligibility really is.  Otherwise, it’s important to keep in mind that a 2 or 3 year old IS going to be difficult to understand…often!

Now that We’ve Reviewed the Expectations, Let’s Address the Misconception!

Functional services will be based on appropriate diagnoses of the young children with whom we work.  These kids DO need services—but when we are diagnosing appropriately and accurately, our services for infants and toddlers will be based on the diagnosis of a language disorder versus a speech sound disorder. We should, therefore, be providing services that FOCUS on language development rather than on speech sound development…or better yet, we should be providing best practices by coaching families to facilitate speech sound development within (rather than separate from) outcomes and activities that target functional communication by and with the child!

If you did not have the opportunity to participate in the live March 2015 ToT webinar, I invite you watch it now!  I would love to hear what you think about the information that I presented and where we should go from here!

What strategies do you use to facilitate speech sound development within everyday functional activities?

ICD-10 Codes and Insurance Reimbursement in EI: The Fun Stuff?!?

11 comments on “What’s the Bottom Line Regarding Articulation in EI?!”