Posted on December 06, 2012 by Dana Childress, PhD in All, Bridging the Gap, Engaging Families, Intervention Visits

I just returned from attending and presenting at the Zero to Three National Training Institute in Los Angeles this past weekend. The conference was wonderful, with 2000 attendees from all over the country. It was amazing to see so many people together focusing on what is such a critically important time in early development. Once again, my brain gained some great food for thought so I thought I’d share some of the interesting tidbits I took away: 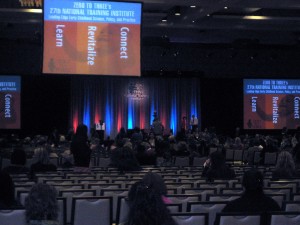 …700 new neural connections are being formed every second during the first 3 years of life!

Dr. Pat Levitt from the Zilkha Neurogenetic Institute gave a fascinating plenary, Ingredients for a Healthy Brain. He said that “brains are built over time” and that we no longer talk about “nature vs. nurture” because we know that genes and experience are partners. He shared information about the effects of “toxic stress” which refers to “prolonged high stress levels (due to factors such as poverty, abuse or neglect) without the support of a caring adult.” The most common cause of toxic stress – neglect, which is most often caused by untreated maternal depression. Exposure to toxic stress damages brain architecture which is why it is so important to intervene early. These toxic experiences can actually change how the child’s DNA works and impact that child for the rest of his life. What I also found so interesting was Dr. Levitt’s emphasis on interaction, which he called “serve and return” and said builds the foundation of all brain architecture. This reminds us of the importance of every child having a responsive adult caregiver who reads his or her cues, responds, and builds that healthy brain. Most of us in early intervention/early childhood know this, but it is a powerful reminder of the importance of helping parents and caregivers be responsive and support healthy interactions for healthy brain development. It reminded my why the focus on routines-based intervention and intervention that focuses on parent-child interactions is so important in early intervention.

For every $1 spend on early childhood programs, there is a $16 return on the investment…wow!

In his plenary, Making the Tough Choices, Rob Grunewald from the Federal Reserve Bank in Minneapolis discussed the economic impact and importance of investing in early childhood. With this kind of return, he said that, were we talking about some corporation or other venture, a high rate of return like this would have investors scrambling to invest. Unfortunately, investing in early childhood is still met with resistance. Mr. Gunewald reviewed the major studies that document the powerful impacts of early childhood programs, such as the Perry Preschool Study and the Abecedarian Research Project. His work made me wonder why we still don’t have universal preschool available for all children in VA. Georgia offers preschool for all 4 year olds, and Michigan offers preschool to targeted groups. While he said that pre-k funding across states has doubled over the past 10 years, we still have a great deal more work to do.

The big take-home message from the 0-3 NTI – what we do is IMPORTANT. Every visit and every interaction with a family has the potential to make a difference in the life of that child. Powerful, amazing stuff.