Get Him Engaged! – 5 Strategies for Engaging Toddlers with ASD

Posted on January 22, 2013 by Dana Childress, PhD in All, Intervention Visits, Practical Strategies
0

You’re on a first visit with the family of a toddler who is suspected of having an autism spectrum disorder (ASD). You greet the mother and try to say “hi” to the child, but he wanders away to continue his circuit around the room.  As you watch, he picks up toys and drop 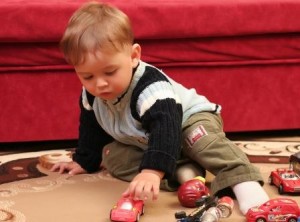 s them, dances in front of the TV when a commercial comes on, then picks up his favorite car and drives it along the back of the couch. All the while he never responds to you and fleetingly looks at his mother who tells you that he loves his car game. So what do you do? How do you get him engaged?

Toddlers with ASD can have amazing strengths at entertaining themselves but find interacting with others very difficult. With a few tricks of the trade, you can pull the child in and help him learn that interacting is fun and useful. Sometimes it helps to out a strategy yourself, but always remember that the goal is to help him interact with his parents because they will be his partners during the week when you are not there!

Here are a few strategies to try:

Find Out What the Mother Would Do First

Ask the mother to tell you more about how the child plays and spends his time. Ask if she ever joins him in this game. Ask if she’ll show you how she would play with him. She might already know some great tricks to get him engaged so ask her before you jump in!

Pick up another car and drive it along the same path on the back of the couch. Just imitate him without demanding that he do anything. At first, you just want to help him get comfortable with you in his space.

Introduce “My Turn, Your Turn”

After he’s comfortable, introduce simple turn-taking by just using the words and pausing every so often for him to take a turn. He might not realize he’s taking a turn at first but that’s okay because you are teaching him. Put your hand in his path for your turn and say “my turn.” When he moves your hand or bumps you with his car, say “your turn” them move your hand. If he pushes his car off of the edge of the couch, you do the same thing to take your turn. You might catch his car as your turn then give it back to him so he can take his turn.

Keep It Going As Long As You Can

Keep the engagement and turn-taking going as long as you can to help him expand his abilities to interact and communicate. Be careful not to push him to becoming too upset and back off when you need to.  Let him take short breaks where you don’t interfere in his play. You won’t want engagement to be too stressful or he will avoid you or leave the area. Always try to bring him back to the game after a break or if needed, switch to another activity if you sense that he’s had enough of this one. Take it slow and try to make it fun!

Coach the Parent to Try the Strategies

If you can, START by explaining the strategies then ask the parent if she would like to try them out with your help. Gently coach her through what to do and praise her efforts. Point out when you see the child become engaged. Afterwards, ask the parent what she thought and which strategies she thinks she can use when you are not there.

What else would you do in this situation? What are your tricks of the trade for getting children engaged?  Share your best strategies!

4 comments on “Get Him Engaged! – 5 Strategies for Engaging Toddlers with ASD”