The practice of early intervention (EI) is always evolving and changing as new evidence comes to light about how to support children and families. This brief summarizes a research study that examined the behaviors of caregivers of young children with autism that were associated with higher levels of joint attention and language in children. It is followed by strategies you can use to evolve your practices based on the findings in the study.

Research: What Do We Know?

Siller, M., & Sigman, M. (2002). The behaviors of parents of children with autism predict the subsequent development of their children’s communication. Journal of Autism and Developmental Disabilities, 32(2), 77-89. (PDF, New Window)

Siller and Sigman examined whether or not particular caregiver communication behaviors would be associated with higher levels of language in children at later ages. Twenty-five children with autism were matched to samples of children with developmental delays or typical development in areas of mental age, language age, and years of maternal education. Each child’s social-communication was assessed at the beginning of the study and 1 year, 10 years, and 16 years later. Caregiver-child play interactions were observed and videotaped in a lab playroom. Specifically, the authors wanted to know: Will caregivers who spend a higher proportion of play engagement targeting objects that are already the focus of the child’s attention, trying to maintain the child’s ongoing activity, have children with more superior communication skills at later ages (p. 79)?

Practice: How Can You Use What You Know? 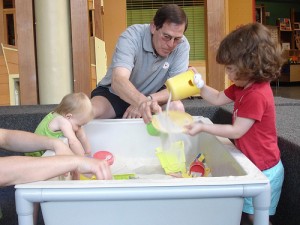 naturalistic and less demanding (i.e., avoiding “say sand” or “what is this?” and instead “You’re poring the sand!” with emphasis on the important word “sand”). Interventionists can also help families synchronize what they say during play with what the child is doing – meaning that the caregiver talks about objects and activities that the child is already playing with or attending to.

This can be challenging when children have restricted interests or tend to play repetitively with toys or other objects (like opening and closing cabinet doors or spinning bowls on the floor). Rather than removing the child from the repetitive activity, the caregiver can join the child in the activity, narrating the play by giving words to what is happening and making the activity interactive. Using what the child is already doing can make it easier for him to engage, communicate and attend for longer periods of time. Learning in this manner is also interest-based, because the play context is one that the child has chosen.

I think that these findings are likely to be true for children who have language or other delays without having autism. Try out what you’ve learned on your next visit using these strategies:

Share these findings with parents – Talk about these key findings and help families reflect on them and think of ways to use them to help their children. Don’t assume that parents won’t understand.

Observe parent-child play and link what you see with these findings – Point out when play and communication are synchronized and when opportunities arise to do that. For example, if the child is spinning a bowl on the kitchen floor, coach the parent in how to take a turn spinning the bowl too and how to talk about it – “my turn!” or “ready, set, go!” when she or the child spins the bowl.

Use the child’s perseverative play rather than always discouraging it – We don’t want children to spin bowls all day long, but using that activity, which he enjoys, and turning it into an undemanding fun interaction can be a great context for learning.

Practice synchronization – This sounds complicated, but it’s really just about following the child’s lead, imitating what he does and says, taking turns, and building on his play. Keep the focus on what he’s doing, rather than on your own agenda, and use his play to help him learn what he needs to know.

Reflect on how you play with the child too – Listen to yourself and think about what you do. Practice implementing these findings too so that you can help families learn them. If you are modeling a more demanding approach, then step back and see how you can make changes as well.

What are your thoughts about these findings? How have you helped families be less demanding in their communication and be successful with engaging their children during play?