The Challenge of Electronic Toys on Visits 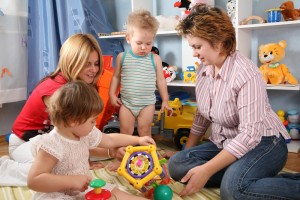 suggest that electronic toys are not so good for toddler communication development. Shocked? I knew you wouldn’t be.

I often found this to be a big challenge on intervention visits – the plethora of electronic toys and books. I would try to join the family as they played with their toys, and found it hard to coach the parent in different ways to engage the child with these toys. The child would often delight in pressing the buttons (sometimes over and over again) to make the lights, sounds, or voices play, but that was about as creative as the play got. The parent would try to talk about pushing the button, ask the child to find a particular button, imitate the sound that played, or maybe praise the child after he found the button. That was often the extent of the language displayed, not because the parent wasn’t trying, but because the repertoire of activities that can be done with many electronic toys is just so limited. You might think, wait a minute, an iPad or the latest Fisher Price toy can do a ton of things…that may be true, but consider this…how can the parent interact with the child while the toy is doing all the work?

Too Many Buttons, Too Few Words

In the new study, parent-child communication was measured when the each dyad was playing with three kinds of toys: electronic toys, traditional toys (like blocks), and books. Children in the study were between 10-16 months of age. When parents and their toddlers played with electronic toys, both said fewer words. There were fewer conversational turns between them, the parent responded to the child’s utterances less often, and the parents used fewer content-specific words. This really matches what I’ve seen on visits and actually, what I’ve experienced when playing with toddlers with these toys myself. It’s just harder to communicate around electronic toys and books. I don’t necessarily thing that electronic toys are “bad” for children – in moderation. Electronic toys grab a toddler’s attention, and I think they are really well-marketed to grab ours (as adults). In moderation, a few lights and sounds toys can be fun. Too many, though, can hijack a child’s attention and make it harder for the parent and child to interact, which is so important for communication and social development. Like most things, it’s probably about balance. A few noisy, flashy toys with more traditional toys, like blocks, cars, baby dolls, rattles and (lots of!) books can go a long way, especially when there is a responsive adult playing along with the child.

So, with this said, what’s an early interventionist to do in a home full of electronic toys? Here are a few suggestions:

Observe parent-child play – You might find that the pair are having a blast and interacting fantastically with whatever toy they have. Or, you might find that they are struggling to interact with toys that trap the child’s attention away from the parent. If a toy interferes with communication, talk to the parent about it, not in a “you bought the wrong toys” sort of way. Ask the parent what she notices about her child’s communication when he plays with his lights and sounds toy, and I bet she’ll say that he doesn’t talk much. That gives you a great lead-in to explore this topic with the parent.

Remove the batteries – I’m not suggesting that you remove them when the parent’s back is turned. Rather, if the child loves his animal farm that makes all of the animal sounds for him, ask the parent what she thinks would happen if the batteries were removed. Sure, the child might not be very happy at first, but when he figures out that interacting with his mom while she makes the silly sounds is much more fun, the parent might see how her interaction with her child, rather than the toy, can make a big difference.

Don’t play with toys – Wha? Yes, how about you suggest to the parent that on the next visit, that you do something else. Ask her what they like to do, what’s fun for them. Ask what they would be doing if you weren’t coming and plan to do that. Early intervention can be immensely successful without toys. Try it and you’ll be amazed. Don’t go in and automatically plop on the floor near the toy box. Afterall, parents really don’t spend most of their day playing with toys of any kind with their toddlers. Instead, they are running errands, fixing meals, doing laundry, cleaning the house, taking walks, getting the mail, etc. Join those activities on your next visit and help the parent seize the natural learning opportunities as they happen.

This is a fascinating subject to me. I love toy play, but I think this study reminds us that there are so many other fun and effective ways to interact with children that have nothing to do with batteries or lights and sounds. Sometimes parents need that reminder, and sometimes early interventionists do too.

Okay, now I am officially stepping down off of my soapbox, dismounting from my high horse. 🙂

What are your thoughts about electronic toys and infant/toddler development?

What do you do in a home full of electronic toys?

Share your thoughts and ideas in the comments below!

12 comments on “The Challenge of Electronic Toys on Visits”