Meet Jesse and his Mother 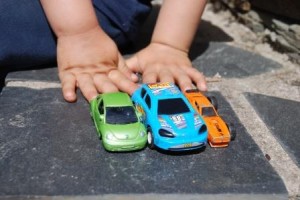 Jesse is 22 months old and often plays by himself. When his mother tries to play with him, she says that he ignores her or will move to another activity. When you observe their play, you notice that she tries very hard to join in what Jesse’s doing, but in doing so she changes the activity right away. You suspect that this is stressful for Jesse, which is why he moves away. You share your observations with his mother and talk with her about how she might ease herself into this space before jumping into playing with “his stuff.” Together, you and Jesse’s mother come up with these steps to go from sitting nearby to actually playing together:

Step 1: Jesse’s mother first sits beside the table where Jesse likes to play. She keeps her hands in her lap and talks softly about what Jesse is doing. She doesn’t join the play yet. She is just getting him comfortable with her presence.

Step 2: Once he’s comfortable and doesn’t leave the area, she moves closer and takes a car. She imitates what Jesse is doing without touching his favorite cars or interfering in his activity. When Jesse drives his car along the edge of the table, she does the same thing with her car. When he stops his car, she stops hers. Again, she’s just passively involving herself and helping Jesse see that her play won’t interfere with his routine (yet!).

Step 3: After imitating Jesse for a while, his mother gently embeds herself in his play. One of his favorite games is pushing his cars off the edge of the table, then putting them back at the end of the line. His mother introduces turn-taking by pushing her car off after Jesse has pushed one of his. Taking this step slowly and quietly, with a gentle warning like “here comes my car” works well. She says “my turn” when her car goes off the edge, then “Jesse’s turn” or “your turn” when he pushes his car. They play this game for a while to establish this new routine. It’s not really “turn-taking” yet but Jesse is staying at the table so that’s a good sign.

Step 4: Since this routine is going well, Jesse’s mom tries to make herself more necessary to the routine. When her car rolls off the table, she catches it instead of letting it hit the floor. When Jesse rolls his car off, this time she catches his car too. She immediately gives him his car. When he pushes the next car off the table, she catches it and gives it to him. She uses the “my turn/your turn” cues and adds simple, fun words such as “ready, set go!” as the car moves towards the edge, “uh-oh” when the car falls and “got it!” when she catches it.

Step 5: To build some interaction, Jesse’s mom catches his car then closes her hand around the car, asks Jesse “where’s the car?” then opens her hand for him to see. After repeating this a few times, she keeps her hand closed and prompts Jesse to approximate “open” to get his car. She accepts any sound he makes or eye contact as his way of taking his turn and opens her hand. This activity is quick so Jesse doesn’t become too frustrated or lose interest. If he does, she moves back a step or two to re-establish the game. After repeating this activity a few times, Jesse says “op-” to get his car!

They continue these games, alternating between interaction and allowing Jesse to play by himself so that he has a break. Jesse’s mom is trying to establish herself as part of his play routine without stressing him too much. She wants to connect with him and encourage his engagement and communication while having fun. In going through this sequence, Jesse is learning that interaction can be fun and his mother is learning how to gently make herself a part of his play. After the game is over, the two of you plan for how she can use strategies like these in other routines.

Using these Steps in Other Routines

These steps are just some examples of how to encourage turn-taking and engagement, which are pivotal skills for communication, learning, and social interaction. Parents can use a my turn/your turn routine like this for other activities such as:

What are some strategies you use to help parents build early turn-taking skills in their children? Let’s think beyond play – how do you help them embed turn-taking in caregiving routines?