“Jesse keeps standing up in the shopping cart. He won’t hold my hand in the parking lot either. How can I keep him safe?” 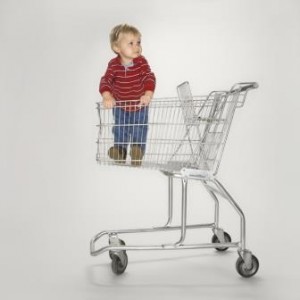 Jesse’s mom is desperate for advice. She’s struggling because, with Jesse’s developmental delays, he’s not yet understanding simple instructions very well. He also has a toddler’s typical strong will. If you were Jesse’s service coordinator or service provider, what suggestions would you offer?

Coaching Jesse’s Mom: 4 Strategies for YOU

Here are a few ideas for you to think about when supporting Jesse’s mother:

Schedule your next visit at the grocery store – If possible, meet the family at the store. Start the visit in the parking lot so you can see what happens from the beginning and accompany them into the store. If you can’t join them, ask Jesse’s mom to describe the grocery strip, from the time they pull into the parking space to the time they leave the store. Dissect the activity to look for clues to improve the situation.

Ask about her goals for Jesse’s behavior & find out what she’s tried before – Find out what she wants Jesse to do. That might seem obvious but your idea of safe behavior might be different from hers. Ask her what she’s already tried to do to help him learn these rules. This will help you understand what’s worked in the past and what was unsuccessful.

Observe, problem-solve, & reflect in the moment – Walk beside them on the way into the store and watch how they interact. Seize the moment when it occurs and brainstorm new strategies together. Encourage Jesse’s mom to try new strategies. Ask why she thinks a strategy worked or didn’t work. Help her think critically about the shopping trip and avoid the temptation to jump in and directly teach Jesse yourself because you won’t be there the next time they go to the store!

Identify what worked – At the end of the visit, ask Jesse’s mom to describe what she plans to do next time they go to the store. Invite her to write her plan down.

Teaching Jesse to Be Safe: 3 Strategies for Jesse & his Mom

Here are a few specific strategies for teaching Jesse the expectations that he must hold his mom’s hand in the parking lot and sit in the grocery cart – two important toddler safety lessons!

Remind Jesse’s mom that SHE is in charge – Even though a strong-willed toddler can seem overwhelming at times, Jesse’s mom is still the adult. If she expects Jesse to learn these two tasks, it’s up to her to be consistent and clear in her expectation. Once he’s got it, she’ll need to keep reminding him about the rules because, well, he’s 2!

Use simple phrases – Ask Jesse’s mom to pick two short phrases to pair with these activities, such as “hold mommy’s hand” and “sit down.” She’ll use these phrases repeatedly, without adding other words to help Jesse learn what they mean.

Play the Waiting Game – This is the most important strategy and can work wonders!

Holding Mommy’s hand: When Jesse tries to pull his hand away or sit down while they walk, his mom should stop immediately and wait for him to stand. Once he does, she takes another step and praises him. If he pulls or sits, she stops again. Each time they have to stop, she says “hold my hand” or “on your feet” to tell him what’s expected. If it takes him a few seconds to stop squirming or stand up, she should wait silently and patiently. With consistency and patience, Jesse will learn that he’s not getting his way and that the expectation is that he hold her hand. Hopefully it’ll only take a few trips for him to learn. A key to this strategy is for his mother to not get upset at his misbehavior and to praise the behavior she wants him to learn!

Sitting in the cart: Same here…if Jesse tries to stand in his seat or unbuckle the cart belt, the cart stops. Once he’s seated again (preferably on his own, without his mom making him sit), the cart moves and he’s praised for staying in his seat. If he tries to stand again, the cart stops and his mom waits patiently for him to sit (she might need to help him). She might tell him “sit down” or “on your bottom” as a reminder. It also helps to have Jesse’s mom interact with him while she’s shopping so he engaged. If he likes to hold a book or toy, or even a sippy cup to keep him busy, that can help too as long as he only gets it when he’s seated. One last point – Jesse should never be allowed to stand in the cart, not even for a moment. Not only is it very unsafe, it will confuse him.

Playing the waiting game to teach expectations like this can be very effective when the parent commits to being consistent and patient. Toddlers don’t know that these are the rules…it’s up to their parents to teach them!

What other ideas do you have for Jesse and his mom? Have you used other strategies for helping toddlers learn safety rules?

6 comments on “Jesse Won’t Sit in the Shopping Cart!”