Watch Me! – Using Modeling as a Caregiver Teaching Tool

Lynn meets Devon and his mother, Janae, at the grocery store for their visit this week. When she arrives, she finds them trying to walk into the store. 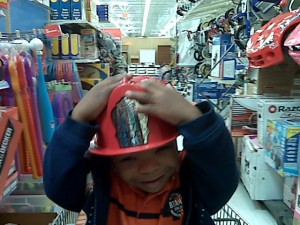 They are struggling because Devon is having a tantrum and Janae is trying to carry him while he kicks and screams. Lynn goes up to them and asks if she can help. Janae puts Devon down and says she doesn’t know what to do. She reminds Lynn that this is why they decided to meet at the store, so that Lynn could help with this problem. Lynn asks if she can try something, and Janae agrees. Lynn takes Devon’s hand and plays a game with him, pretending to be tigers, rabbits, and birds trying to get across the parking lot. Janae follows them and says “I wish you could come to the store with us every week because he won’t do that for me.”

Is the Problem Solved?

Lynn has had the awesome opportunity to observe a natural routine for Devon and his mother. Rather than just hearing about the struggles walking in to the grocery store, she has wisely scheduled to join the family during their weekly trip. Rather than sitting back at the family’s home and spouting out tons of “have you tried…?” ideas, she is able to problem-solve with Janae in the moment. Lynn is able to get Devon into the store without a tantrum, so…is the problem solved?

Lynn demonstrated a technique that involved playfully distracting Devon during an activity that he doesn’t like or typically cooperate in. She was successful at dodging the typical tantrum, but it really doesn’t matter because she won’t be there the next time the family goes to the store. She is probably assuming that Janae watched her and would pick up how to play the games she played with Devon. From Janae’s comment, though, you can get a sense that she watched, but she doesn’t think she can do it. If that’s what Janae feels, then Lynn’s modeling did not accomplish the real goal, which was to help Janae learn ways to get Devon into the store without a tantrum.

If we just rely on modeling or demonstration for families, we are not very likely to truly build the parent’s capacity to manage similar real-life situations in the future. In fact, it could have a detrimental effect because the parent could see someone else being successful when she herself cannot. Without a more intentional approach to supporting the Janae’s learning, Lynn could do more harm than good.

Three Ways to Use Modeling to Support Parent Learning

Let’s consider how Lynn could wrap the following three steps around her modeling to better support Janae’s learning. Here’s the same situation, but with Lynn more actively helping Janae participate in her son’s success:

Model with Narrative – While playing the pretending game with Devon, Lynn narrates what she is doing for Janae. She says she’s trying to make the walk more enjoyable as a way to help Devon learn that the trip into the store can be fun.

Model with Reflection – After they get about half way to the store, Lynn asks Janae what she observed so far. They talk about Devon’s different reaction and why he didn’t tantrum. They reflect on the specific activities Lynn used and which of those Janae wants to try.

After modeling, it’s ALWAYS good to remember to hand the reins over the parent. Giving the parent the opportunity to try what she has just observed and make that strategy her own is really when the learning happens!

Here’s what happened next for Lynn and Janae:

After establishing a few specific strategies that might work for Janae, Lynn steps back and Janae takes Devon’s hand. He starts to squirm and fuss but Janae says “Let’s jump like a kangaroo into the store!” and takes Devon’s hands to help him jump. When they reach the entrance, they stop and reflect about how that went. Devon made it into the store with his mom without incident. Success!

Consider, though, who is responsible for Devon’s success? At this point, both Lynn and Janae are, but Janae feels more capable because she has experienced her own ability to use the strategy. She is more likely to own this new strategy now. When the strategy becomes hers, and she’s able to use it when Lynn isn’t there for support – that’s when they’ll know that intervention worked!

How have you used modeling to support caregiver learning?

For those of you who are using coaching interactions with families, what could Lynn have done differently before and after her modeling to make this activity even more successful?

Share your insights about how we can improve this interaction in the comments below!

4 comments on “Watch Me! – Using Modeling as a Caregiver Teaching Tool”