Joey is 25 months old.  He was referred to his local early intervention intake coordinator by his parents secondary to their concerns about his 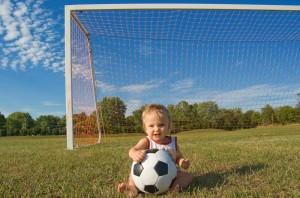 intelligibility and inability to effectively communicate his needs or wants.  They reported that he uses approximately 15 words but “talks in such a garbled manner” that both parents and Joey’s older siblings become frustrated when they don’t know what he is saying or requesting. When asked to describe Joey’s speech, his father noted that it sounds like: “babble-babble-babble-mama-babble-babble-babble, as if he knows he should be talking in longer sentences but he doesn’t have the vocabulary yet to form the actual sentence”.  His mother added that he sometimes sounds like he is humming around his words: “mmmmmmm-ball-mmmmm”.  Joey loves playing with balls.  His family often takes an extra ball with them to Joey’s brother’s soccer practice.  While his brother practices, Joey and his Dad kick the ball. According to Joey’s parents, they find his speech particularly frustrating before meal times; they noted that he loves to help them choose and prepare food for snacktime every day, but that they often don’t understand which foods and/or drinks he is requesting or suggesting.

We see this quite often, don’t we?!  Parents will often come to us with concerns about their child’s intelligibility and “speech skills” because they have difficulty understanding the messages that their children are trying their hardest to convey.  As a speech-language pathologist (SLP), my first goal with this child would be to conduct a comprehensive communication assessment by collecting a speech and language sample.

Within this play-based sample, I would listen for those three speech-related red flags that I presented in the March Talks on Tuesdays webinar and in my previous blog post: 1) initial sound deletions; 2) distortion or consistent difficulty with vowels; and 3) deletion of LOTS of sounds—the child uses only one or two consonant sounds. Ultimately, however, above and beyond my observations regarding Joey’s speech productions, I would assess whether he is using the language skills that are developmentally expected for his age.

Keep in mind that we expect children to have a vocabulary of at least 15-20 words by 18 months, although typically developing children often have more than 50 words and are beginning to string simple, repetitive 2 word phrases together (e.g. more drink, my juice) by this age.  By 24 months, we expect a children who are typically developing to use AT LEAST 50 words and to combine lots of different phrases. Between 18-24 months, children may still use some jargon to expand their sentence length and to attempt to provide “more information” in their messages.  If you have a child who is 20-24 months and using a lot of jargon and not a lot of words, however, you are probably looking at a child who has an expressive language disorder.

Is It a Language Disorder or a Speech-Related Disorder?

Toddlers who are extremely difficult to understand are often still using a lot of jargon when they speak because they lack vocabulary…or have difficulty with grammatical markers… or struggle to put words together into phrases.  All of these are skills that are expected by two years of age.  We typically expect that jargon (which can be defined as “babbling with intent”) will begin to fade at about 18 months and completely dissipate by 24 months.  If a toddler has an expressive language delay or disorder, his intelligibility will be affected as he will often continue to use a lot of jargon in lieu of words.  Instead of recognizing that the jargon is a substitute for real words or grammar that SHOULD have developed, we often misinterpret the jargon to be speech sound production errors.

In this scenario, Joey’s desire to communicate is there…his speech is continuing to develop…his language skills are not. Therefore, most toddlers, including Joey, who are difficult to understand will be diagnosed with a language disorder—not a speech-related disorder!  It is the language (or lack thereof) that is most likely having the greatest impact on this child’s intelligibility.  Unless Joey presents with any of the speech-related red flags, his speech will most likely continue to develop as his language skills are addressed in early intervention!

Early speech and language skills are acquired and used primarily for communicating during every day, natural social interactions. Traditional articulation therapy focuses on the repetition and drilling of target sounds…there is nothing natural about this process. Early intervention is intended to be embedded into families’ every day, natural activities and routines to ensure that children are processing the information that they are learning in order to utilize these new skills within their own environment—this is known as authentic learning.  Targeting articulation directly and drilling toddlers to produce speech sounds is the furthest thing from “natural” that there is!

Optimal early communication intervention services are provided in natural environments, which offer realistic and authentic learning experiences for the child and promote successful communication with the caregivers. Authentic learning can maximize children’s acquisition of functional communication skills and promote generalization of newly mastered behaviors to natural, everyday contexts. In order for a child to process information, it needs to be presented within a normal, naturally occurring event or opportunity in his or her own environment.  Using flashcards to teach sounds or words, or creating superficial teaching opportunities like pushing the child to imitate specific sounds in isolation (e.g. “say /ba/”), is not going to work.  Infants and toddlers truly do not learn speech or language through artificial methods.  For most children, when functional language and communication needs are addressed within the natural environment, speech will develop as well (ASHA, 2008)!

What Would This Look Like for Joey and his Family?

My first suggestion for Joey’s parents is to support and encourage him to continue to produce the sounds and words that he IS producing within the routines that he most enjoys.  If he makes ANY sounds, imitate those. If he uses any word approximations or words, repeat them back to him! Continue to imitate his sounds and words…and then expand on them a bit.  If Joey says “babble-babble -nana-babble-babble-juice” while choosing foods for his snack, repeat his word approximations and words back to him:  “Banana!  Juice!”  Then, I would coach his parents to expand on his verbalizations: “You want bananas and juice for snack today! Let’s have bananas and juice!”  Let him know that what he is attempting to say has been heard and IS important.  I would encourage his parents to provide him with articulate models of his words and to provide a model of a complete sentence in order to facilitate Joey’s expansion of his message.

What other authentic learning opportunities might you use to facilitate Joey’s expressive language development during snack time and ball play during his brother’s soccer practice?

What are some other ways in which you can help Joey’s family incorporate naturally occurring opportunities to embed speech sound development into these experiences along the way?

4 comments on “Address the Language: The Speech will Follow!”